Check out our video which has been a Featured Video on the FQXi website in their video contest Show Me the Physics:

The fields of astronomy and astrophysics are presently engaged in an unprecedented era of discovery as recent missions, such as NASA’s Kepler mission, have produced data sets that are revealing the presence of thousands of planets orbiting other stars. As of May 2014, PlanetQuest indicates that over 4600 exoplanet candidates have been detected mostly by relying on the transit method. The transit method aims to detect planets that eclipse their host stars with respect to our point of view on Earth. We are working to develop methods that detect more subtle photometric effects that will extend both detection and characterization capabilities. These methods will be developed to extend the capabilities of future missions as well, such as NASA's K2 Mission, which came online in June 2014, and the Transiting Exoplanet Survey Satellite (TESS) to be launched in 2017.

Considering these photometric effects in addition to transits provides a more precise characterization of transiting exoplanets and improved estimates of the stellar mass, which is typically estimated by spectroscopy and often with significant uncertainty. In addition, it is potentially more interesting to note that these effects provide information about the scattering and emissive properties of exoplanetary atmospheres (Seager et al. 2000; Charbonneau et al., 2002; Hood et al. 2008; Rowe et al. 2008), which complements information obtained via absorption spectra recorded during transits. Consideration of these factors promises to provide both greater return and higher precision from both the Kepler database and future missions.

We have been developing the EXONEST algorithm (Placek, Knuth, Angerhausen, 2014; Placek & Knuth, 2014), which utilizes advanced Bayesian machine learning methods to perform both parameter estimation and statistical model testing of photometric exoplanet models. EXONEST advances the state of the art in utilizing exoplanet photometric effects, such as BEER (Faigler and Mazeh, 2011), as well as other efforts (Shporer, 2011; Esteves et al., 2013), by including transits, and going beyond first-order approximations associated with circular orbits and accommodating elliptical orbits, which we demonstrate is critical since planets closely orbiting their host stars are not always in circularized orbits as previously imagined (Johnson et al., 2006; Fischer et al., 2007; Placek, Knuth, Angerhausen, 2014). In addition, the Bayesian machine learning methods we utilize employ advanced Markov chain Monte Carlo techniques, such as Nested Sampling (Skilling, 2004; Sivia and Skilling, 2006) and its more recent cousin MultiNest? (Feroz and Hobson, 2008; Feroz et al. 2009). In addition to enabling one to perform parameter estimation using multiple data sets from multiple sources (data fusion), it also enables one to perform statistical model testing via the computation of the Bayesian evidence (Sivia and Skilling, 2006; Knuth, 2014). This allows one to test one photometric model against another. This is a significant advance since it may provide the ability to confirm the presence or absence of an exoplanet by computing the probabilities of independent photometric effects in a single data set without relying on secondary observations.

Not only does `EXONEST have the capability to characterize both transiting and non-transiting exoplanets in situations where photometric effects are detectable, but these effects can provide better estimates of the stellar mass, which is critical in obtaining precise orbital elements, as well as valuable information about the planetary atmosphere, through the albedo and reflectance phase function, the planet’s day- and night-side temperatures, and the planet’s effects on the host star/s.

Placek B., Knuth K.H., Angerhausen D. 2016. Combining Photometry From Kepler and TESS to Improve Short-Period Exoplanet Characterization. In Press at the Publications of the Astronomical Society of the Pacific. arXiv:1511.01082 [astro-ph.IM]

OrbitViewer
Developer: Placek B., KnuthLab, 2012.
Platform: Matlab
Release: Forthcoming
OrbitViewer? is a MatLab? GUI that allows the user to adjust the orbital parameters of a planetary system and visualize both the reflected light curve and the orientation of the system. 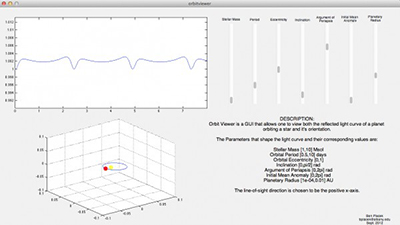 EXONEST
Developers: Placek B., Knuth K.H., KnuthLab, 2012-2014.
Platform: Matlab
Release: Forthcoming
EXONEST: The Exoplanetary Explorer is a Bayesian Exoplanetary Inference Engine, which enables a host of exoplanetary (and stellar) photometric models to be tested against Kepler and CoRoT data. EXONEST, which was originally developed to rely on Nested Sampling, currently relies on MultiNest, which enables estimation of the Bayesian evidence for statistical model testing.
See EXONEST discussion above for additional details.